What is static filtering

Static filtering statically creates conditions based on the following information and "passes" or "blocks" packets based on those conditions.

A set of conditions that determine whether to "pass" or "block" a packet is called a filtering table.

For example, let's look at the contents of the filtering table when a firewall that performs static filtering is placed between the PC on the LAN side and the web server.

Register the packet forwarding and returning conditions in the filtering table so that only the packets that access the web server are passed.

The filtering table has the following rules:

Now, I will explain the details of each condition from number ①.

The HTTP protocol is used to access the Web server, and TCP is used as the transport layer protocol. Web servers generally wait for Web access on TCP port number 80, so filtering is performed in the direction from LAN to Web server.

In the condition of number 1, it is specified to pass packets addressed to the web server from the PC whose source is the IP address on the LAN side.

In the firewall, you dictate which conditions apply to which interface in which direction.

When considering packet filtering conditions, there is a policy that must be decided first. You must choose one of the two below.

Both may seem similar, but there is a big difference in security strength.

This method defines possible attacks in advance as filtering conditions. All packets that do not match the conditions will be passed. There are countless dangerous attack methods, so it is difficult to define all without omission.

This method pre-defines the packets you want to pass. All undefined communications are blocked, so you can ensure more security than method (1). Even if there is an omission of the definition, it will be blocked, so it is safe.

For the above reasons, the default filtering policy of many firewall products is to block all unmatched communications.

In other words, since the default policy is to block, if there is an omission in the conditions to pass, it will be blocked.

Some applications use a large number of port numbers, creating too many conditions (holes) for packets to pass through, which can greatly reduce security.

Since there is always a hole through which incoming and outgoing packets can pass, the weak point is that there remains a risk of intrusion from crackers, viruses, etc. 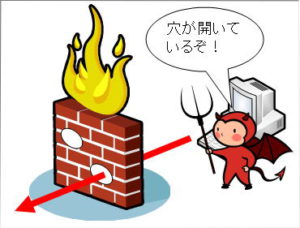