QoS is an abbreviation for Quality of Service, and refers to technology that identifies packets for each traffic, performs priority control, and controls bandwidth.

Therefore, QoS is increasingly being implemented on routers and switches.

Then why is this QoS technology necessary?

Communication over IP is a best effort process. Processing is performed in order from the packet that arrived first. If more packets arrive than can be processed, they accumulate in the buffer. When the buffer becomes full, packets are discarded and the discarded packets are resent. (*For TCP)

For example, under what circumstances does this phenomenon occur?

In the case shown below, the problem does not occur.

The bandwidth of the network on both sides of the router is 100Mbps. Also, assume that your router is powerful enough to handle 100Mbps of traffic.

In that case, there is very little wait between the time a packet is ingested on the router's input interface and the time it is sent out the output interface. If the amount of packets flowing into the router is sufficient, no problem will occur.

But what about the picture below?

*Even if the connection to the Internet is an FTTH optical fiber service, the actual throughput is not 100Mbps.

If more traffic than the bandwidth of the output interface flows into the input interface, it will not be able to keep up with sending packets.

This situation creates a bottleneck at the router, causing a delay before the captured packets are sent out. Furthermore, packets that overflow the buffer will be discarded, and each application will not be able to secure the necessary bandwidth.

A question arises as to why troubles occur only with IP telephony and video conference communications.

In the case of voice data, if it is not delivered to the destination without delay, the voice will be interrupted when the voice is played back. In the case of video data, the image is distorted and it becomes difficult to understand what is being projected.

Packets that must be sent in real time must be delivered to the other party in real time and without being discarded on the way.

With Web and FTP, there is no problem even if there is a slight delay in delivering packets to the other party or if packets are discarded on the way.

That's because even if it takes a little time, the web page is displayed and FTP download is possible. Even if the packet is discarded on the way, the packet that did not reach the other party due to the mechanism of TCP communication will be delivered.

That's where QoS comes into play.

Examples of QoS familiar to us include the following.

What about police cars, ambulances, and fire trucks?

If you sound the siren and appeal that you are an emergency vehicle, you can drive preferentially even if the road is congested.

what about the bus?

If there is a dedicated bus lane on the road, buses are given priority to use this lane.

If you have a priority admission ticket for an attraction called Fastpass (FP), no matter how popular the attraction is, as long as you have this, you can enter preferentially from another entrance.

What about Universal Studios?

If you have a paid E-pass (priority ticket) called the Express Pass Booklet, you can enjoy attractions preferentially.

QoS is the realization of such a mechanism on the network.

QoS functions can be broadly divided into three functions: "packet identification," "priority control," and "bandwidth control." These functions are used to operate.

With QoS, multiple buffers (queues) are prepared for each packet transmission line, and packets with different priorities are distributed to separate buffers.

By preferentially retrieving packets from high-priority buffers and sending them out onto the line, different network quality and bandwidth are ensured for different applications. 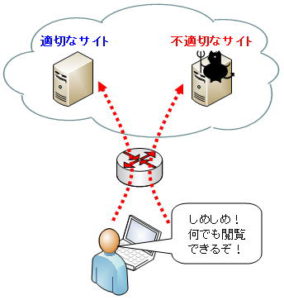 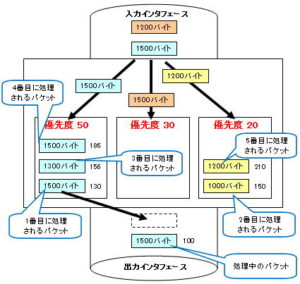 Mechanism of QoS and priority control