Depending on the standard, the radio frequency band to be used and the transfer speed are different. Some wireless LAN devices support multiple standards. Wireless LAN standards include IEEE802.11b, IEEE802.11g, IEEE802.11n (Wi-Fi4), IEEE802.11ac (Wi-Fi5), and IEEE802.11ax (Wi-Fi5). We will now briefly describe the characteristics of each standard.

The IEEE802.11b standard is compatible with the existing IEEE802.11 standard. The wireless frequency uses the 2.4 GHz band, and the transmission speed can be increased from 2 Mbps to a theoretical maximum of 11 Mbps. Data communication is possible in a wide range even in the house, and it can be used stably because there is little interference with other devices that use radio waves.

*The maximum transfer speed is a theoretical speed. Depending on the communication procedure, etc., the effective speed will be slower.

The radio frequency uses the same 2.4GHz band as IEEE802.11.b, and the theoretical maximum transmission speed is 54Mbps.

*The maximum transfer speed is a theoretical speed. Depending on the communication procedure, etc., the effective speed will be slower.

The IEEE802.11b standard was designed to be compatible with the existing IEEE802.11 standard, but this one was standardized using the latest technology at the time without being bound by compatibility.

The center frequency of the channel used for IEEE802.11a has become an international standard, replacing the 4-channel allocation of J52 (5.15 to 5.25 GHz) used in Japan due to the revision of the ministerial ordinance in May 2005. W52 has been changed to 4 channels, and W53 has added 4 channels.

This makes a total of 8 channels available.

In January 2007, an amendment to the ministerial ordinance added 11 W56 channels that can be used outdoors, bringing the total number of channels available to 19.

Due to the change in channel allocation, even if you are using a product that supports 802.11a, there is a possibility that you will not be able to connect between devices manufactured at different times.

The appeal of IEEE802.11a is that it can be used outdoors and has a large number of available channels.

Draft version 1.0 of this standard was established in March 2006, draft version 2.0 was formulated in August 2007, and was approved as an official standard in September 2009.

It is a standard that allows data communication at a maximum transmission speed of 600 Mbps and an effective speed of 100 Mbps or more using the 2.4 GHz/5 GHz radio frequency band. Higher speed data communication is possible than the conventional method.

Looking at the figure of 6.93 Gbps, you may think that it has become extremely fast, but it is only theoretical and the communication speed varies depending on the product. You may have seen home broadband routers with a maximum speed of 1300Mbps.

Therefore, IEEE802.11ax is devised so that communication performance does not deteriorate even when many slave devices are connected and communicate at the same time. 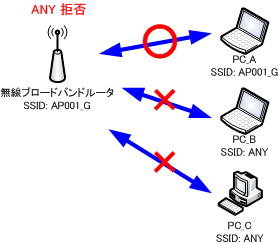 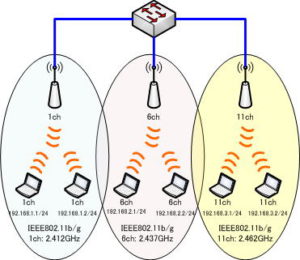 Wireless LAN (what is a channel)