CSMA/CA stands for "Carrier Sense Multiple Access with Collision Avoidance" and is also known as a carrier sense multiple access/collision avoidance scheme. It is adopted by the wireless LAN standards IEEE802.11a, IEEE802.11b, IEEE802.11g, and IEEE802.11n.

CSMA/CA is a protocol similar to the CSMA/CD method adopted by IEEE 802.3 (Ethernet). If you look only at the name, the only difference is that the last letter is "D" and "A".

Like CSMA/CD, wireless LAN checks radio waves to see if there is a host currently communicating before starting communication. This is "Carrier Sense".

Multiple hosts share the same transmission medium (radio) and initiate communication when no other hosts are currently communicating. This is "Multiple Access".

Even if it can be determined that communication is possible by "Carrier Sense", in the case of CSMA/CA, data is sent after waiting for a random amount of time.

This is the difference from CSMA/CD. With CSMA/CD, data collision can be detected because the signal sent to the transmission medium (wired) is affected when it collides with other signals.

Since there is no reliable means of detecting collisions, each host waits a random backoff time before sending data to reduce the probability of collisions in data transmission.

The figure below shows the transmission procedure for the "CSMA/CA with Ack" frame.

When it determines that no signal is flowing on the radio wave, it waits for a random amount of time and starts transmitting data.

Then the access point sends an ACK to the host. After receiving this ACK, it waits for a random amount of time and transmits the data.

Since wireless cannot detect frame collisions, collisions are avoided (Carrier Avoidance) in this way. There are several types of evasion algorithms, such as "CSMA/CA with Ack" and "CSMA/CA with RTS/CTS".

Unlike wired LANs, wireless LANs have the problem of not being able to detect that other hosts are communicating.

Radio waves from a host communicating with an access point may not reach other hosts. Occurs when hosts are far apart.

Also see the figure below. This problem also occurs when there is a shield that makes it difficult for radio waves to pass through.

This is the problem of "hidden terminals".

Collision detection "Carrier Sense" cannot detect that other hosts are communicating, so they will send frames to each other.

As a result, frame collisions occur and throughput decreases. There is a way to avoid this problem by using RTS/CTS.

The figure below shows communication control by "CSMA/CA with RTS/CTS".

In "CSMA/CA with RTS/CTS", the host that wants to send data requests permission to send (RTS: Request To Send) so that data is not sent at the same time.

Upon receiving the request, the access point sends a Clear to Send (CTS).

A host that requests an RTS will start sending data when it receives a CTS.

Other hosts that have not requested to send data assume that another host now has the right to send and that they cannot send until they receive an ACK. This exchange involves exchange of RTS and CTS signals, so the throughput is lower than "CSMA/CA with Ack". 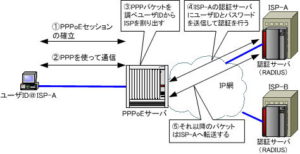 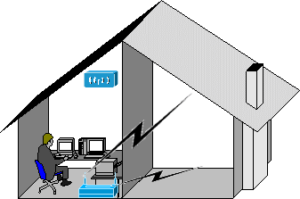