OSPF is a link-state routing protocol standardized by the IETF. Unlike EIGRP, which was originally developed by Cisco, routing is possible between multi-vendor routers other than Cisco routers. One of the major features of OSPF is the concept of areas.

An OSPF network allows you to build your network in a hierarchical structure by configuring a small network as one area and connecting multiple areas to area 0 (backbone). The area-based design approach of group management keeps network changes within the area and improves performance. As a result, convergence time is reduced.

OSPF can build large-scale networks compared to distance vector routing protocols such as RIP and IGRP.

However, as the scale of the network grows, problems emerge.

To begin with, OSPF is a routing protocol with a very high load on routers that uses Dijkstra's algorithm in its calculations to find the shortest path. It consumes a lot of router CPU and memory resources. As the scale of the network increases, the load on routers increases.

Also, as the scale of the network increases, the possibility of failures and network changes increases, so frequent recalculation of SPF (shortest path priority) becomes necessary.

Furthermore, since the number of routers will increase, the number of LSAs exchanged between routers to build the topology database will also increase.

Therefore, in OSPF, when the scale of the network becomes large, the network is divided into multiple areas and a multi-area network is constructed as shown in the figure above.

An OSPF network allows you to build your network in a hierarchical structure by configuring a small network as one area and connecting multiple areas to area 0 (backbone). In this way, one network is divided into multiple areas, and the method of dividing it into intra-area and inter-area routing is called "hierarchical routing."

This area-defining design approach allows us to segment the reach of LSAs, keeping network changes within the area and improving performance.

OSPF routers are called by three types of names according to their role. Depending on its role, the types of advertisements sent and received and the OSPF tree information will differ.

A router whose interfaces connect only to routers within the same area. No contact with other areas.

A router that has interfaces connected to other areas.

A router with interfaces that connect to other ASes or networks using routing protocols other than OSPF.

Below are some of the types of LSAs available. There are many types of LSA types, and the name of the name may be different in the manual and each vendor's manual. Multi-area OSPF requires an understanding of LSA types.

*LSA type 6 also exists, but it is flooded by multicast OSPF routers. We omit it here.

When OSPF is set on a router, Hello packets are sent from all interfaces participating in the OSPF process, neighboring routers are detected, and registered in the neighbor table.

OSPF routers collect this LSA and register it in their link state database. After learning all LSAs, Dijkstra's SPF (Shortest Path First algorithm) is run to compute the shortest path for each destination network.

When calculating this SPF, the cost, which is calculated by "10 8 /bandwidth", is used. The obtained shortest path is registered in the routing table.

When the OSPF learning process is executed and the routing table is completed, Hello packets will be sent using the multicast address "224.0.0.5" in order to maintain the adjacency relationship.

The interval for sending this Hello packet varies depending on the type of network.

The Hello interval and Dead interval settings can be freely set by the administrator, but they must match between neighboring routers. In EIGRP, different values ​​were fine, but in OSPF, it is necessary to match them, so be careful.

To set the Hello interval and Dead interval, execute the command below in interface configuration mode.

Since OSPF is a link-state routing protocol, unlike distance vector routing protocols such as RIP and IGRP, it does not perform frequent routing updates, but it sends LSA packets every 30 minutes to maintain information. Remember that LSAs are exchanged periodically even after convergence.

OSPF uses neighbor relationships to share routing information. This proximity is called adjacency. When adjacencies are established on the OSPF network to which they are attached, they exchange link-state information.

For example, if you have 5 routers as shown in the diagram below, you will need 10 adjacencies.

Establishing adjacencies and exchanging link-state information with all neighboring routers can add a lot of overhead.

By the way, by electing DR and BDR, in a five router environment, DR and BDR will receive LSA as shown in the figure below.

In Ethernet, one DR and one BDR are elected. The criteria for selecting DR and BDR are determined by PRIORITY and ROUTERID.

DR election is determined by the following rules: However, DR and BDR are not always elected as expected. The timing of powering on the router also plays a role. If another router has already been elected as the DR before the OSPF process starts up, the router started (added) later will not be the DR, no matter how high the ROUTERID and priority are. Can't become DR until is down.

1. A router with the highest priority is elected in the order of DR and BDR.

2. If the priorities are the same, the routers with the largest ROUTERID are selected first, followed by the DR and then the BDR.

A loopback interface is a virtual interface that never goes down unless the router itself goes down. In an OSPF network, set this if you want to make it appear that there is always an active interface to ensure stability.

If there are multiple active interfaces, the ROUTERID will be the highest IP address assigned to the interface of the device itself.

In other words, regarding the selection of DR and BDR,

If you pay attention to the order of , you can see which router is elected as DR and BDR. 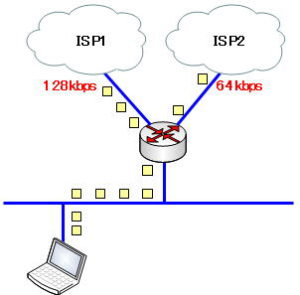 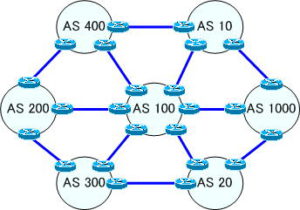 What is an AS (Autonomous System)?