What is an AS (Autonomous System)?

The Internet is vast and contains numerous networks. In order to deliver data to destinations all over the world, it is necessary to manage routing information for all networks on the Internet.

It is easier and more practical to manage a large network by dividing it into smaller parts. Therefore, we came up with the concept of Autonomous Systems. An autonomous system is also called an AS.

An AS is a large network divided into smaller networks, and the Internet is made up of interconnected ASs.

An AS is a network under a single administration, and each AS is administered by a different organization or company.

Basically, within one AS, governed by the same internal routing policy, identified by a unique AS number. This AS number is a number that is managed and registered on the Internet and is assigned along with IP addresses by IANA.

An AS is a smaller division of the Internet. A number is assigned to manage this AS. This number is called an AS number (ASN).

What if this number is duplicated and more than once on the Internet? It becomes difficult to identify AS.

Therefore, AS numbers are assigned by IANA and managed together with IP addresses.

AS numbers are assigned in blocks to Regional Internet Registries (RIRs). To obtain an AS number, you must follow the prescribed procedures at the RIR that has jurisdiction over the region or with the national Internet registry to obtain the number.

The most common example of an AS is an ISP, through which most businesses and individuals connect to the Internet. ISPs control not only their own network routes, but also the routes to all the corporate and customer networks they connect to.

AS numbers are used to drive routing protocols such as IGRP, EIGRP, and BGP. Especially BGP, which is the main routing protocol for routing on the Internet, requires a unique AS number.

As explained above, an AS number is a 16-bit (2-byte) integer number. Due to the increase, there is a threat of depletion in the near future.

So the AS number is extended to 32 bits (4 bytes) octets (32 bits). However, not all networks support 4-octet AS numbers. Therefore, a mechanism is provided to enable communication with routers that do not support 32-bit AS numbers.

A routing protocol that specifies an AS number

There are several types of routing protocols that dynamically maintain and manage routing tables. They can be broadly classified into the following two types.

An autonomous system, also known as an AS (Autonomous System), is a collection of networks controlled by a single management policy.

*It may be controlled by multiple management policies.

Autonomous systems are managed by assigning unique numbers to ISPs and providers by IANA. When used within a LAN, the administrator can arbitrarily assign and use it.

The Internet is made up of multiple autonomous systems.

There are the following types of EGP and IGP.

BGP has various path attributes and determines routes based on complex policies.

Relationship between AS and routing protocol

Routing protocols that specify AS numbers include IGRP and EIGRP for IGP, and BGP for EGP.

It is very easy to set up routing with AS numbers for IGRP and EIGRP, which are IGPs. Just specify the AS number to which the router belongs.

EGP's BGP, on the other hand, is more complex to configure because it exchanges routing information between different autonomous systems. This is because you need to do a good design before setting it up.

Because each AS is managed by a different organization, different ASs may use different interior protocols.

Therefore, BGP must be able to communicate between various ASes. Therefore, BGP has a mechanism that can interpret external routing information and correctly interpret it inside its own AS.

The most commonly used EGP on the Internet today is BGP. It is used by the majority of autonomous systems, with an estimated 95% using BGP.

EGP must be used to route between ASes.

So where does EGP work?

Each AS (autonomous system) needs to notify other ASes of route information, etc. to reach its own AS. Therefore, reachability information is mutually exchanged between other ASes through EGP running on ASs and border routers.

Now, let's use the diagram below to explain how a packet reaches its destination via multiple ASs on the Internet.

Packets are directed across the Internet through multiple steps.

(1) A source host sends a packet to a remote host on another AS.

(2) Since the destination of the packet does not exist within the own AS, it finally reaches the border router on the edge of the own AS. The border router selects the best one from the database it stores about the ASs it connects to and directs the packet to the adjacent next-hop AS.

* Here, the sample network in the figure is small, so it arrives at the destination AS immediately, but in reality, the processing of ② and ③ is repeated.

(4) After that, the packet guides the next hop within its own AS according to the IGP rules set within the AS, such as OSPF within the AS, and finally arrives at the destination host. 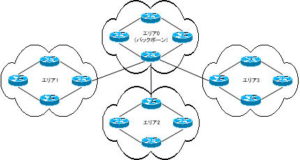 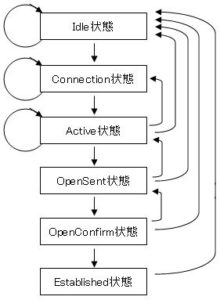