build a network at home

Broadband connections such as FTTH (optical fiber) are now the norm for home Internet connections. In addition, we have entered an era in which not only personal computers but also smartphones and tablets are owned by individuals. In other words, there are multiple terminals in the home that need to be connected to the Internet.

that's right. Connect to the internet no matter what. Such times have changed. Therefore, the problem for each household is that they have to build a LAN in their home to connect multiple network terminals to the network.

Sports have rules. If everyone who plays doesn't remember the rules, the game won't work. If we use baseball as an analogy, the ball must be hit with a bat, and after hitting the ball, the player must run clockwise while stepping on the base.

If you write it like this, for beginners, building a network at home is

You may think, "Isn't this a bit too much for me?"

But don't give up here! Today, unlike a decade ago, home broadband routers are equipped with functions that can be configured very easily. In particular, if you do not use a particular network, you do not need difficult settings.

However, if I could give advice, it would be better to use network devices from the same manufacturer as much as possible, as this will reduce problems and make setup easier. Basically, any manufacturer's equipment can be interconnected, but connecting equipment from other manufacturers is extremely difficult for beginners to set up.

Indeed, compared to a decade ago, each manufacturer has devised ways to make network settings surprisingly easy. A decade ago, network devices such as routers were very expensive devices, but now you can buy one for several thousand yen.

Although it depends on the scale of the network, it is now possible to build it with a budget of about 10,000 to 20,000 yen. In that sense, you can easily try to build a home LAN.

How to build a network at home includes:

If the devices connected to the Internet are concentrated in one place, or if you only need to connect to the network in a relatively small area, you can use the "wired method" and the "wireless only method". is enough.

However, if you want to build a network that allows you to connect to the Internet from any room in a condominium or a house, regardless of whether it is on the first or second floor, you will have to think about how to build a network using only wires, and how to build a wireless network. It may be difficult to spread the network to every corner of the house with the method of building by yourself. Depending on the location, there may be cases where a PLC is used.

In order to enjoy viewer-participation-type programs on digital television broadcast interactive services, it is necessary to connect to the Internet. It is designed to be fun to play.

Summarizing the characteristics of each, it looks like the following.

The figure below is a picture of the wiring on the wall that is hidden by the mall.

In the case of the manager's house, since it is FTTH, a hole is made in the wall only for the lead-in part of the optical fiber. Even though there are holes, there are 0 holes for the outdoor unit of the air conditioner, so there are no holes for the LAN construction.

In the case of wired connection, wiring from room to room is basically done by making a hole in the wall and wiring to the next room, or passing it through the ceiling. It's better, but it makes it look worse.

Therefore, we recommend the "wired and wireless method", which has excellent cost performance.

If you live in a concrete condominium with poor radio wave conditions, you may want to consider the option of constructing using indoor power wiring.

If you connect wirelessly from room to room and between floors, the wiring area will be cleaner. Also, not all terminals (PCs, consumer electronics, game consoles) have a wireless LAN function. Depending on the terminal, it varies whether it is a wired connection type or a wireless connection type. If you build by combining wireless and wired, we recommend "building with wired and wireless" in the sense that it will be flexible when additional terminals increase later.

Recently, the performance of wireless broadband routers has improved, so if all you need to do is use the Internet with a wireless LAN connection in your home, installing one router is enough to cover connections from wireless terminals throughout your home. This is too much. 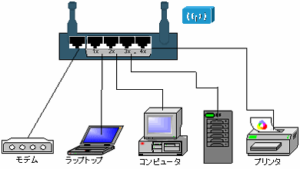 Build a network at home (install a wireless router)