Electronic mail, also known as e-mail or e-mail, is a system for exchanging messages using electronics.

E-mail has become familiar thanks to the spread of broadband and the e-mail function of mobile phones, but e-mail itself is nothing new. It's been around since the early days of the internet.

Since the mail server at that time was operated by UNIX, it was possible to log in to the mail server with Telnet and read the mail from the command line, and it remained within one personal computer communication system. There was no such thing as MIME, and attachment files and complicated emails like today weren't possible back then.

Now, e-mail is the system that represents the Internet. It has become an integral part of our means of communication. It can also be used as a means of data exchange because it can attach not only sentences (text) but also images, sounds, videos, and spreadsheet data.

Also, if you send an HTML format email, you can send an elaborate email like a homepage.

The exchange of e-mails is carried out as shown in the figure below.

The port numbers used by each protocol are shown in the table below.

Since both POP3 and IMAP4 are protocols for retrieving e-mails stored in mailboxes on mail servers, they are also called "last one-hop protocols."

As shown in the diagram above, e-mail reaches the mailbox of the destination mail server from the sending side via several mail servers.

The mechanism of e-mail can be broadly divided into the functions of sending and receiving e-mail. In addition, there is also a queuing function that temporarily stores incoming and outgoing mail in preparation for forwarding.

The program that delivers and forwards such mail is called MTA (Mail Transfer Agent). The mail server implements this functionality.

Popular composite programs for MTAs include sendmail, qmail, and Postfix. Among them, qmail and Postfix are attracting attention as new-generation MTAs.

On the other hand, MUA (Mail User Agent) is a program that does not have these functions and concentrates on displaying, reading and writing emails, sending emails to the mail server, and receiving emails from the server's own mailbox as the user's front end. called.

Originally, the MTA and MUA were one program. In the early days of e-mail, the programs were not very large in scale, as they only sent and received e-mails from users on the same machine. The scale has grown.

By that time, the price of client computers had dropped and performance had improved dramatically, so MUA functions began to be performed on the client side.

Nowadays, it is more efficient to divide and operate MTA and MUA, so it is common to operate them separately.

The main job of the mail server is mail delivery (Delivery) and mail transfer (Transfer).

Mail delivery is the local function of the mail server to ensure that mail is delivered to the user's mailbox.

The mail server has a mailbox for each user, and manages which name of the user is registered and which mailbox the user uses. When I receive an email addressed to a user I manage, I store it in that user's mailbox.

E-mail forwarding is a function to judge from the domain name on the right side of @ in the destination e-mail address and forward it to the next mail server. The e-mail address must be written in the format below.

Mail user management works differently depending on the OS and applications such as sendmail. It uses the UNIX user registration mechanism, and the Windows server uses the Active Directory mechanism. 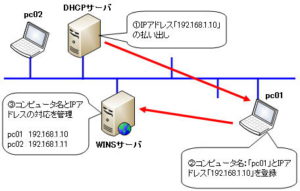 What is WINS ・lmhosts file 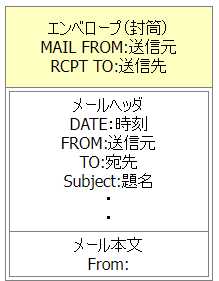