The data to be sent is divided into transmission units called segments. Also, IP communication does not guarantee that packets will arrive at the other party in the order they were sent. Packets can also arrive in pieces.

Therefore, TCP uses a sequence number so that the transmitted segment can be restored to the original data.

The sequence number points to each byte position in the transmitted data, and it is possible to restore the original data by arranging it based on the number.

A TCP header is constructed as follows:

As you can see from the figure above, the sequence number is 32 bits long. It is represented as an unsigned integer value.

In TCP, when a connection is started, each channel is given a random sequence number as an initial value.

The reason why it is random is that it is easy to disguise the segments if they always start with a fixed number or are assigned in order such as "1, 2, 3, 4, 5 ...". Therefore, in the three-way handshake, the initial value is set to a value randomly determined at the time of connection.

The steps are as follows:

A diagram of the three-way handshake is shown below.

The flow in the above figure is as follows.

The sender sends a SYN packet to the receiver indicating that the initial sequence number is 'x'.

From sender to receiver

From receiver to sender

The sender records that the receiver's sequence number is "y" and sends a packet with ACK set to "y+1" to the receiver.

From sender to receiver

In this way, the three-way handshake establishes a connection by sending three packets back and forth.

You can see that TCP has much more complicated control than UDP.

To make it a little easier to understand, this time we will specifically show the exchange when the initial sequence number is the following value. 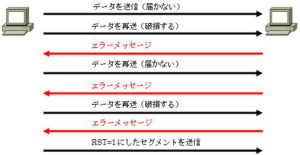 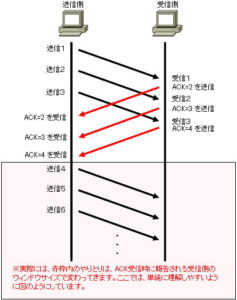