In order to exchange data between computers, various protocols are required, ranging from physical forms such as cables to file transfer and applications.

What if these conventions were implemented in a single protocol?

Various machines exist on the network. There are different cable types, different connector shapes, and different applications. Doing all this in one protocol would be a huge undertaking.

What about protocol upgrades?

Having one protocol to do everything is not very efficient.

The OSI reference model is a reference model that divides the communication functions that a computer should have into seven layers. It is commonly called the OSI 7-layer model.

Modeling results in the following benefits:

If the interface with each layer does not change, there is no need to worry about other layers

You don't have to worry about which cable to connect when sending e-mail, or whether your Internet connection is ADSL or FTTH.

E-mail data goes down from the application layer where MUA (software for sending and receiving e-mails: Outlook, etc.) is located to the lower layer, and passes through the connecting cable (physical layer) as an electrical signal (bit signal). It will reach your computer. The receiving party passes the received electrical signal from the lower layer to the upper layer, and finally delivers it to the other party's MUA.

Can concentrate only on exchanging protocols with the same layer

By assigning roles to each layer, there is no need to worry about what the lower layer and upper layer protocols are doing. Each layer can concentrate on working with protocols on the same layer without worrying about the layers below or above.

* The OSI reference model is advocated by the ISO (International Organization for Standardization), but it is only a conceptual model, and protocols are not developed according to it. In practice, there are also protocols that span multiple layers.

Division of Roles in the OSI Reference Model

The OSI Reference Model is a model established by the International Organization for Standardization (ISO). In order to realize data communication between heterogeneous devices, the design policy of the network structure is defined by dividing it into 7 layers (layers). It is also commonly called the OSI 7-layer model.

In this way, by dividing roles in each hierarchy, changes in one hierarchy will not affect other hierarchies. As a result, functionality can be easily modified and extended at each layer.

For example, even if a twisted pair cable was used to connect to the network, but the connection is changed to a wireless connection, there is no need to change the protocols of layers above 3.

Advantages of the OSI Reference Model

What is a protocol 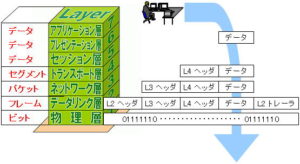