TCP is a protocol located in the transport layer of layer 4 of the OSI reference model. TCP divides the data passed by the application into the optimal size for transmission. This is called segmentation.

Each subdivided segment has a header. The header contains information such as:

This number is used to reassemble the data according to the order assigned by the source TCP and pass the data to the application layer protocol.

Packets do not always arrive in the order in which they are sent, and not all sent packets reach their destination. It may be discarded or lost during delivery.

In TCP communication, if the packet has arrived properly, it will be notified to the sender. Also, if a parcel is damaged or lost in transit, the data can be reliably delivered to the other party by notifying them and confirming that there is no arrival notice.

By doing this work, TCP allows the sending application to focus on doing its job without worrying about missed deliveries.

Note that data communication may not always need to be reliable. With TCP, there are various checks to ensure that data is delivered to the other party, so there is a disadvantage if the overhead is large.

As explained in "Communication by TCP" above, TCP has various confirmation tasks to ensure that data is delivered to the other party, so there is a disadvantage if the overhead is large.

TCP guarantees the arrival of data, so if a package is damaged or lost on the network, it will notify you of this, confirm that there is no notification of arrival, and resend it. Real-time performance is lost.

TCP can also perform congestion control to control and reduce the amount of data sent when the network is congested. This also undermines the real-time nature of TCP.

Therefore, TCP/IP networks provide a protocol called UDP (User Datagram Protocol) instead of TCP. UDP has the advantage of being more real-time than TCP because there are no acknowledgments, retransmissions, or congestion control that impair real-time performance.

Taking advantage of this advantage, it is used in applications such as video and audio streaming where real-time performance is important, and in IP telephony (VoIP).

TCP/IP has its roots in research on packet-switched networks by the US Department of Defense, which began in the late 1960s. TCP/IP has a long history of operation and is now the Internet standard. At the time, the data communication system was inefficient, connecting large computers with modems and allowing only one pair to occupy one line.

This is ARPANET, the starting point of the Internet.

ARPANET was originally developed for military purposes, seeking a communication network that would function even if part of the network were destroyed in a nuclear war, etc., but this eventually led to the current Internet. I'm in

Around the end of 1995, when Windows 95 was released, TCP/IP became familiar even in general households. Isn't this area still fresh in your memory?

The spread of TCP/IP since then has been remarkable. From around 2000, broadband will spread to each household. Since then, TCP/IP has become an integral part of our lives. 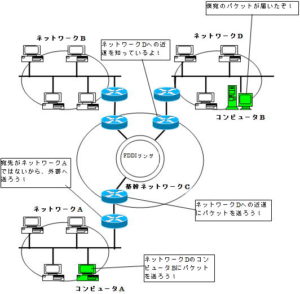